I was supposed to be having my first crochet lesson today  with my lovely friend jane (desperate to be in the girls who can crochet club)- but the lists got the better of me and I had to cancel. It wasn't helped by the fact that we had a wild duck chase this morning!
Just as I was leaving on the school run my pal Julie called to say she'd seen 2 little ducks being shepherded to safety on the other side of the village - and thought they might be ours. I hadn't finished my sentence before Cleggy was off to see if they were our runaways. On reflection I think he was thinking 'if they are ours then great....if they aren't ours I'm having them anyway!'.

I promised to meet him at the location of 'the sighting' and zoomed over as soon as I'd delivered the boys to school. Now, it dawned on me that the place in question was a very busy crossroads on a particularly busy road, at rush hour. As I approached I expected to see Cleggy in the middle of traffic chaos, stopping cars and wildly chasing two very speedy ducklings around. It gave me an instant headache - as I knew that, if this was the case, I'd have to get out of my car and do the same! (particularly since I wasn't completely what you'd call 'dressed'...)
Anyway  - when I got there it seemed the kindly (/crazy) lady in the newsagents had shooed them towards the safety of the pub car park. We spent a while having a good search (in the rain) but found nothing. Cleggy gave the newsagent his mobile number in case they ever showed up (for a packet of crisps and a paper?)
We got a call from the man at the golf course later in the day (crazy newsagent lady seemingly handing number out willy nilly) to say he thought they were on his pond - so we'll follow this lead tomorrow! Anyway - I know some of you will have found this yourself, but the lovely Julia Crossland has posted an e-book on her site today sharing some crochet patterns/tutorials, including this beautiful bunting, a phone cover and cushion among others. 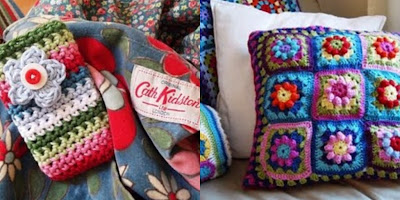