My guest blog (by geordie) 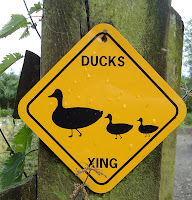 We had 2 ducks called Coco and Lola. They escaped through a hole that a fox left after he took one of the chickens for his dinner.
[see saga] We looked for them but we didn't find them.
[random story] This week was a sad week because my hamster Banana Joe died [yep, known as BJ...so wrong!]
He died in his sleep and we buried him in a small box in the garden. We had a kind of funeral where we all said bye and Dad found some fake flowers to mark the spot... 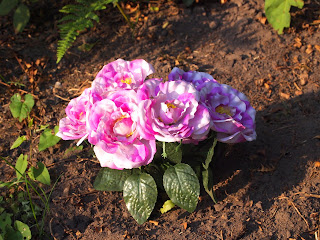 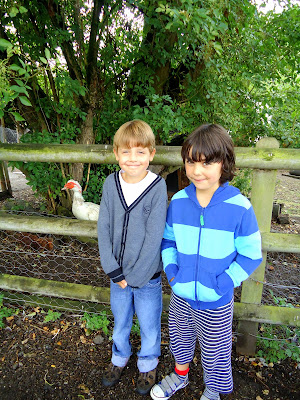 [back to the point]   When we thought our old ducks weren't coming back we were allowed to go and get some new ones. Me and my friend George went to the duck lady with dad. Mum stayed at home for the peace. [true] 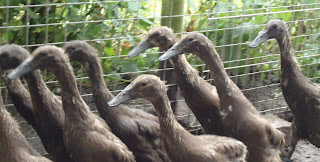 We saw lots of ducks, like these runner ducks. They are funny and all run in the same way.
The geese with the orange bills were noisy and duck with the red face was creepy. At first I thought it was a statue but then it moved. 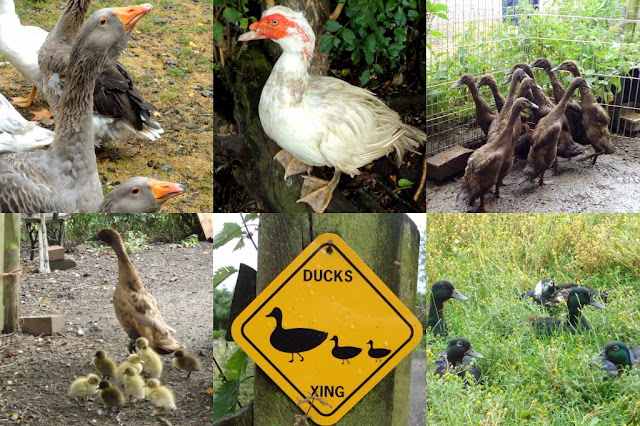 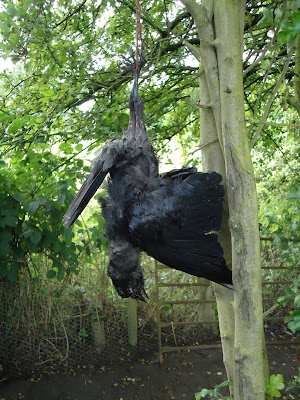 The crows and jackdaws were being mean to the chicks and stealing eggs so the lady found a poorly one and when it died they hung it up to let the other ones know not to be mean or they would get hurt.
We also saw some llamas. 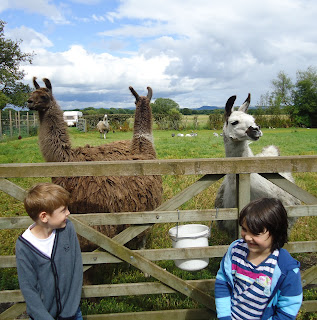 They have very big front teeth that stick out and they can spit. Me and George couldn't pose for the photo because we were too worried that the llamas would nibble us.
We found lots of llama poo![nice] 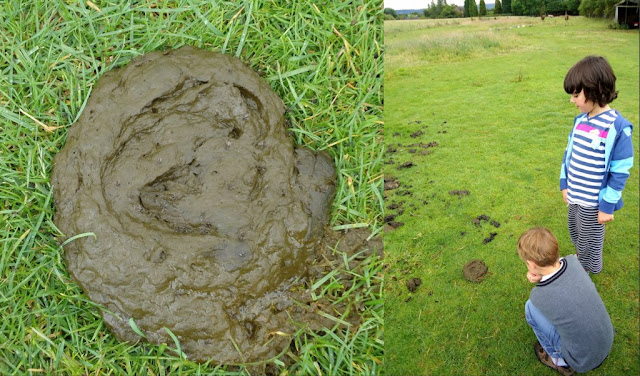 After that we were allowed to go into the farmhouse for a drink. It's apple juice in that glass. I made myself at home and had a good chat. 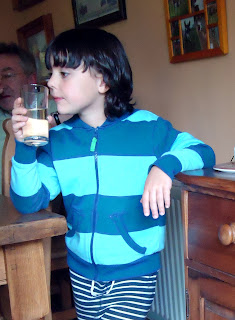 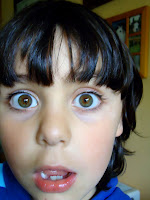 We were allowed to play with the camera. George took this one of me being surprised to see chickens 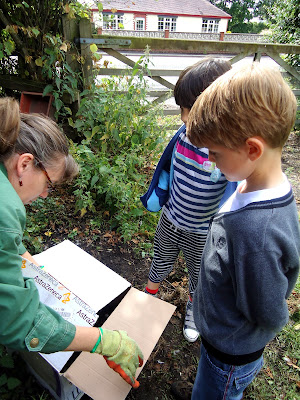 The lady called Anthea let us pick some ducks. We chose one boy and 2 girls.  They are Call ducks and were born in April.

You can tell its a boy because it cheeps rather than quacks and has a curly tail. We put them in a box and took them home. 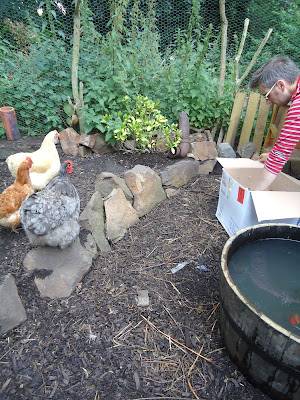 When we opened the box the chickens were very nosey. We called the boy duck Bertie after George's Grandad. The girls are called Polly and Dolly. 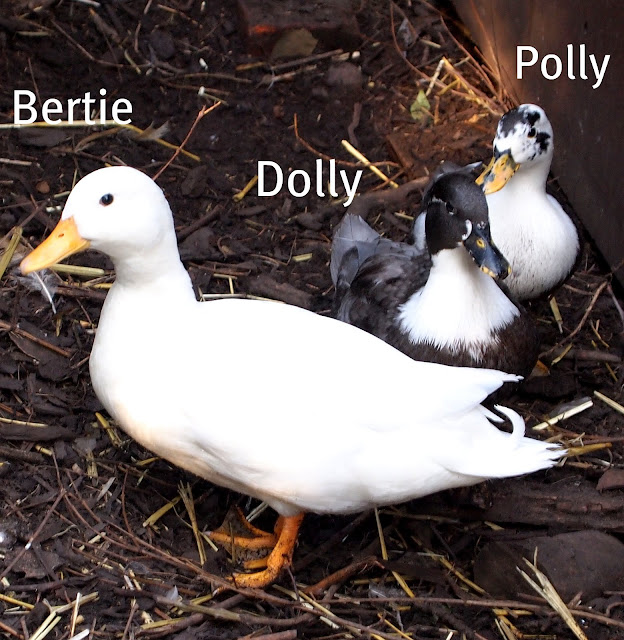 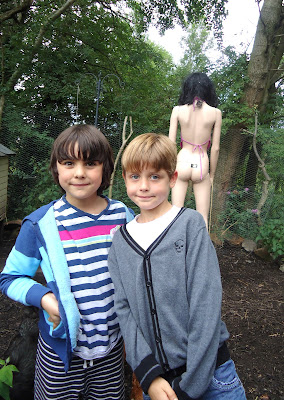 We played in the chicken area for a bit. There's Bertha in the picture - she still hasn't got many clothes. Dad says she looks like she's doing a BBQ . She's done a good job of scaring the foxes away and always gives Granny a scare if she has to go down at night.
We needed a house for the ducks so Dad bought a kennel. It was in the sale  [or so he said]
We were  allowed to paint it [Farrow and Ball? I ask you...]
and I was allowed to use a hammer by myself [where was I?] 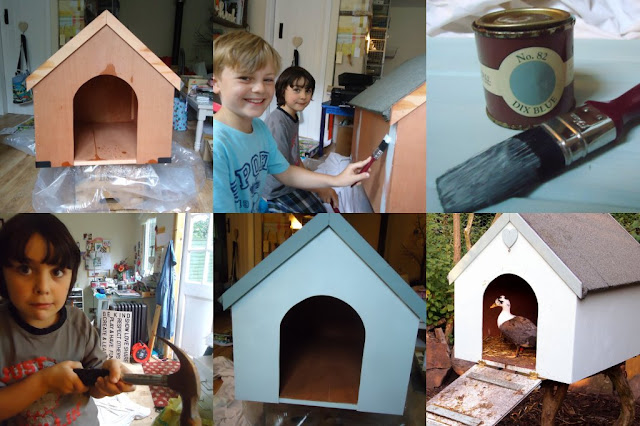 Then Dad built a tree house for it to sit on. The ducks are very happy in their new house. 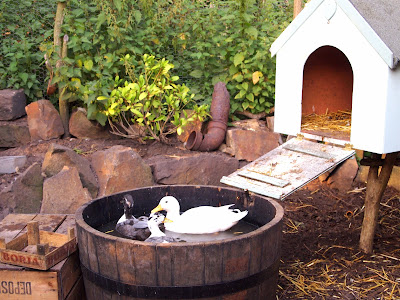 They are at the bottom of the pecking order. This is Muriel
[bottom until this point] chasing them I also built a den this week. One day I found a letter from someone magic in it. I've written a letter back and it has disappeared so I'm waiting for a reply.
I hope you liked my blog.