I was half expecting Cleggy to pop down to the bottom of the garden throughout the night to check on the ducklings...but he managed to wait until morning!
Although we both had plenty of work to do we kept finding ourselves having a little peep...and a wee listen to the gorgeous cheeping that was coming from inside. 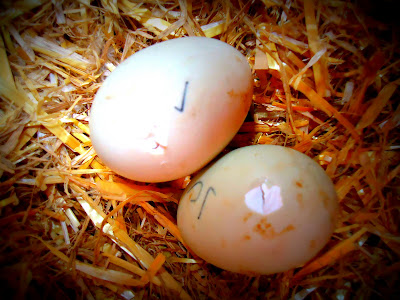 At lunchtime we were gutted to find that one egg had disappeared from the coop - and we soon found the culprit: a pesky magpie. Unfortunatly he had eaten the whole thing for his own lunch.
Granny had a little weep...we had a little moan...and all hopes were resting on duckling #2. 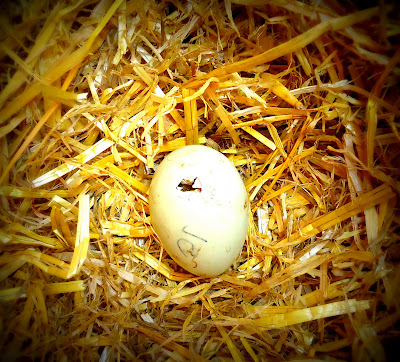 We closed the door of the coop, letting Pearl out every hour or so (although she was keen to stay inside...probably thinking 'what the heck is this beak!!') to keep the big black birds out 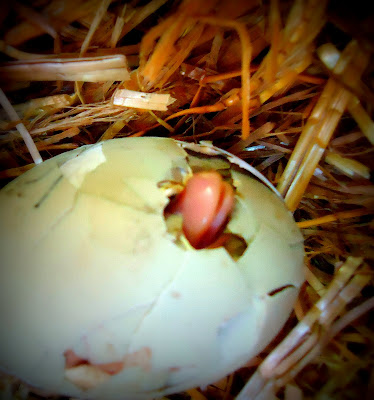 So...we were gutted all over again when we went back a little while later to find the second little duckling had hatched out, but then died. No idea why.
Granny had another little weep!
The biggest hole in the shell had appeared after mr magpie had paid a visit, so maybe he had given it a little poke. Who knows? 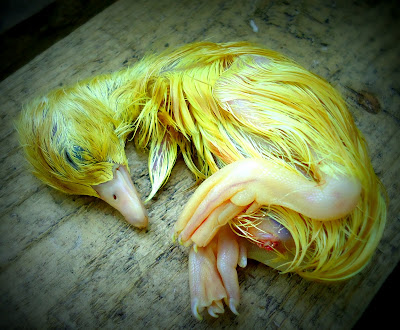 I guess it's just nature - some things work out, others dont.
It's sad, but in the scheme of things...
(cue the 'things die' chat with #3 son!)
Sorry not to be posting pictures of fluffy ducklings!
fee x
ps. apparently greedy magpies are a common problem - they tend to take eggs mostly when they have chicks of their own - so only for a few weeks in the spring. I tried to find a cute picture of a magpie chick to make us all feel better...but they're just not that cute!
Posted by fee @ chipper nelly at 22:11