So, as expected, turns out making a dress IS much harder than it looks! (knew it!)
The pattern clearly said 'Easy' but I'm wondering who it was aimed at, clearly not me. Saying that, Mum and I got half way through before stopping (giving up hurts) and my lack of patience/boredom threshold didn't spoil the afternoon... 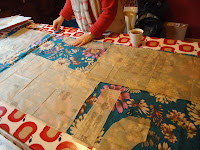 She's taking my (super complicated) half made dress and pattern to one of her pals tomorrow for some expert advice, and we're back on the project on Wednesday evening.
I did learn some things
1) you have to look after your pattern (Mum said that about ten times!)
2) you always need more pins to keep in place than you think/can be bothered
3 I won't be wearing my dress anytime soon (and hard dress making does not justify cake)
I couldn't bear the thought of sewing all day without producing something, so took a few little bits and pieces along to the hairdressers
Must just add that due to frolics with Cleggy yesterday (not that kind...) neither of us can move very fast (or in anyway other than forward and upright)today.
We decided that we couldn't wait for a team of burley builders to move the railway sleepers - we could do it ourselves (over confidence in ability wrapped up as 'spirit of adventure' yet again)
I'm not kidding, they weigh A TON. And had to be moved from the front garden to the very bottom (150 feet?) then dug into the chicken area. However many times Cleggy told me to try I simply couldn't even remotely lift one end.
The boys were all in charge of keeping the chickens amused and out the way following a near decapitation when Muriel literally leapt under the pickaxe (Alfie maintains it was a suicidal leap) 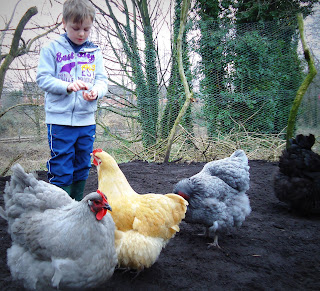 and after some serious huffing, puffing and engineering skate board carrying contraptions, we finally got the sleepers in place
We wanted to watch the brood get themselves to bed but there was a 'no wine on school days' rule to be broken, so went down later to check they had all gone into the coop.
We had been wondering why the two new girls didn't go in at dusk and last night found out...Pearl sits at the coop door and refuses to let them in!!! Mean.
So Gladys and Muriel were asleep behind the compost bin 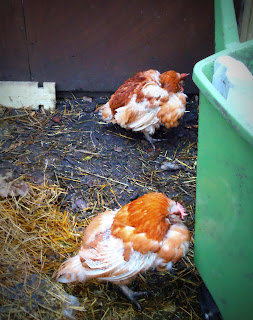 Think it might take a while for them to be fully accepted...
fee x
Posted by fee @ chipper nelly at 23:35