Not sure why I thought the bad weather was over - it's still January! 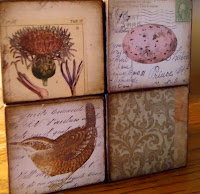 Anyway, despite the snow I'm dreaming of spring and here are the first attempt at new style chunky blocks.
I've decided not to stamp letters on them as the print is fairly busy. I've got some personalised tags in mind though...
They are solid birch so quite heavy to post but feel lovely to hold. 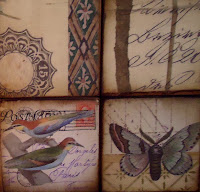 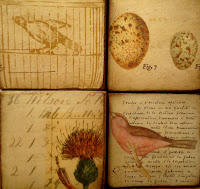 On a completely different note, our friendly (and funny) builders have just popped over to discuss the work starting on the house next week. I was caught doing the housework to some Michael Jackson (think it might even have been disco classic 'wanna be startin'something'!) at which point Chris the joiner literally threw himself into what can only be described as a routine.  Turns out his kids had got 'Michael Jackson The Experience' dance game for the XBox for Christmas and he was addicted!!! Clearly (Think it might be on my birthday present list...).
At which point my shuffle threw Barbara Streisand into the mix and the fun was over.
Posted by fee @ chipper nelly at 10:49